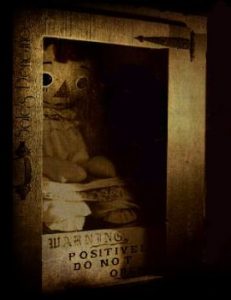 If you happened to stumble drunkenly into this piece, no doubt after finally succumbing to the peer pressure of: “what do you mean you haven’t seen Annabelle? Where have you been living, under a rock?”, then a bit of fair warning… you’re coming into the haunted doll saga halfway into its fruition. To put it bluntly, you’re the chap or gal that never saw Fellowship of the Rings, and is in the middle of Two Towers bothering the front rows with all manner of foolish questions. There’s this whole investigation, scientifically-backed with BIG logic bombs and 5 syllable words, on the Chucky sponsored subject… and if my savvy editor is on point, then there should be a link right about… HERE! With that said, if you really don’t give a toss on the phenomenon and just want a fly-by of Annabelle the haunted doll then you walked into the right article; it’s either this or the Wikipedia entry, and mine won’t put you to sleep.

The whole rigamarole of Annabelle began in 1971. The legend starts off with a 28-year-old nurse in Hartford, CT. The nurse, whose name remains shrouded in mystery, obtained a 3-foot Raggedy Ann doll for Christmas from her dear old mom. The thing was huge, plump and a scream… pardon the pun.

Anyway, after the nurse got over the shock of receiving by far the most age-inappropriate gift for a qualified medical professional, she slowly fell enamored of the thing. It could have been worse, back then socks were considered great holiday gifts.

A couple of nights later, Annabelle’s owner and her roommate started noticed some weird shenanigans occurring in the general area of the doll; they concluded it was their vivid imagination playing tricks on them. Dismissed the whole thing… but a lightbulb went off in their cerebellum and a game was set afoot.

The two roommates began to play ghoulish games with the doll; leave it about the house in different poses as a terror-inducing gag. It became a tradition; who could pull off the best scare before the start of the shift. Stuff the doll someplace funky and try to spook each other. Sitting on the kitchen table over a bowl of Fruit Loops. On their beds cuddled on the pillow. Inside the fridge playing with the frozen carrots. In the shower with a rubber ducky. In a darkened closet with a sunhat. Well, as the days slugged on, they tired of the gag and went back to their normal routine, sans creepy doll.

The doll, meanwhile, wouldn’t have any of it. Nope, not by a long shot; the doll had gotten a taste of hijinks and wanted more. A week or so into January, the wild Raggedy Ann started appearing- PUFF – out-of-thin-air in her old haunting grounds… and, even more unsettling, she started to move her arms; or so the girls say.

Up until this point of the story, the skeptic could make a valid argument… they could dust-off the ever-useful Ouija board dispute. “It didn’t move on its own! Timmy for the love of God, stop fudging about and don’t move the freaking pointer!”

But, the original owner of the doll was nothing short of the perfect storm of psychosis and triggers waiting for the barometer to drop and a cold front to sweep in… I think that’s how storms are formed, not sure, research on the subject seems boring. Anyway, the owner was a storm waiting to break. Superstitious. Naive. Gullible. Paranoid. Deeply religious. Prone to fancy while her friend snickered: “Oh dear Lord, Annabelle drank all the beer!” and hid the last Coors behind her back. The nurse started crossing herself and intoning a quick Our Fathers and resolved to put a stop to it.

The cure, as it turned out was worse than the disease.

The nurse, frightened and believing that she was the prey of supernatural and demonic forces, flew to a renowned medium. The medium proclaimed that the doll was haunted by the spirit of a little girl named Annabelle. To confirm her findings, the psychic held an occult ritual that closely resembled a seance. Candles, pentagrams, chants, the whole nine yards. They checked for spirits and verified the medium’s initial findings… Annabella was a 5-year-old kid that had once been struck and killed by a car right outside the nurse’s apartment.

The nurse told that the doll was possessed but not violent in nature, took Annabelle back home, and started treating it like the kid sibling she never had. She bought it toys, clothes, jewelry, and candy. The nurse and Annabella became inseparable. The nurse would confide in Annabelle, take her to work, on long car trips, to the movies, to the ice-cream parlor.

A Turn For the Worse

The months passed and Annabelle slowly, but surely, started acting wiggy… more so than usual. And not just Annabelle but the area around the doll.

The nurses began hearing knocking sounds in their house late at night; something worming its way in the walls. They saw flashing lights, red, yellow, and orange, glint off the ceiling in their bedroom. Their beds would shake, rattle, and roll at midnight. The room’s temperature would mysteriously drop. The doll, every so often, would emit a low growl.

Then, everything took a tailspin and the plane not only crashed into the mountain but set the mountain aflame and caused a wildfire.

One of the nurse’s boyfriend fed up with all the weird events pestering him whenever he came for some frisky business demanded that they burn the damn doll. The straw that broke the camel’s back? The freaky little monster would stand at the door waiting for the nurse to come back home after their shift. Enough was enough. Fire up the trashcan in the backyard, dumb the maleficent malcontent; “we’ll make s’ mores over her burning husk.” A plan was made.

Annabelle, as you can imagine, wasn’t too keen on being barbecue fuel. One late afternoon, before the cook-out, a scream smacked the house awake. Both nurses come into the living room and notice the future groom – who had been dozing off – wide awake clutching his neck.

“I dreamed that thing was choking me,” he pointed to Annabelle.

One of the nurses pried his hands apart and lo-and-behold… his neck was lined with marks, and scratches and deep red whelps. The man springs off the couch grabs the dammed doll and flings it across the room.

“You’re just an effing doll,” CRASH, against the wall.

The minute Annabelle slides down onto the floor everything goes insane. Pictures and frames explode off the wall. Chairs roll across the room. The couch flips on its side. The lights bang off. Complete pandemonium.

Worse still, the finance is slapped across the room by an unseen force. He slams into a window, shattering the pane into pieces. The nurses run out and pick him up; seven slashes across his belly, shards of glass embedded in him. The widow disemboweled him and ripped him wide open. He dies bleeding there on the street.

Scared silly, the young women call the High Episcopal Church in Hartford, who connected them with paranormal investigators and authorities in the unknown Ed and Lorraine Warrens.

The first red-flag in the Warrens’ investigation was the tall-tale the medium short-changed the nurse with.Why would God allow the spirit of a child to possess a doll? When you die, according to the Warrens, your time on this plain is done. You either go up or go down, you don’t stay for an encore. As such, the Warrens concluded that Annabelle was in fact a demon preying on the young women’s sympathy… a demon that had in fact been released into the mortal sphere by that strange seance. Up until then, Annabella was just a doll… nothing more, nothing less.

The demon became more and more powerful the more the girls dotted on it. By recognizing it, they were inviting it to go beyond the doll and possess their home. They were granting it might and substance and allowing it dominion over their existence.

The house had become infested – what the Warrens label a home that has been claimed by an earthbound spirit or a demonic being – and the doorway was the doll. The hellish creature was bound and anchored to the Raggedy Ann.

After Annabelle became responsible for a death, the Warrens decided it was best to lock her up. The creature inside was too strong to be exorcised; it had tasted blood. The demon had been challenged by a mortal and it had not only triumphed but grown fat on that victory. For safety, they decided to lock behind glass cabinet with trinkets, amulets, and runic symbols… Not to mention a huge DO NOT TOUCH sign.

Annabelle is now captured behind wards and sigils at The New England Paranormal Research Center. The center is a cabinet of curiosity of all manner diabolic and enchanted items. Items that the Warrens claim are proof the existence of the paranormal… and items and doodads too dangerous to mess about with.

Annabelle is locked, to this day, in a thick, Plexi-glassed enclosure. Incidents since Hartford, with students of the occult and researchers, still attest to Annabella’s strength and desire to wreak havoc.
Annabelle, they have recordings and eyewitness accounts of the damage she’s done.

For More MAcabre Tales Check out our blog.