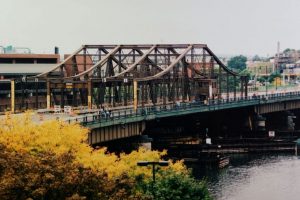 The Charlestown Bridge is one of the few bridges that you can find in Boston that connect you from the suburbs to the city itself. As of today, it is considered to be one of the oldest bridges in the city. However, a project is underway to replace the bridge which is slated to be completed in 2023. That means you have plenty of time to check it out for yourself. After all, it is located on Boston’s Freedom Trail. But is the bridge considered to be haunted as some Bostonians claim? And what sort of stories have been told that may indicate the fact that it might be haunted? As we dive into the history of the bridge, we will discuss the events that have happened that may have lead to the many ghost stories that have been circulating far and wide about the Charlestown Bridge.

The Charles River was one of the first waterways sanctioned by the government at the time for ferries to pass through the city. In the 1630s, Harvard University had used the riverway as a way for ferries to cross through all while using the proceeds to financially stabilize the college. This was approved by the Massachusetts General Court in 1640. Between then and 1785, the Harvard Corporation owned the riverway and charged ferries passing through. By 1786, the Charles River Bridge was constructed, and by that time, it was agreed upon that the Harvard Corporation was to be compensated annually for any lost ferry income.

The bridge was privately owned and operated while the proceeds went to the investors of the bridge. In 1792, the West Boston Bridge was constructed connecting the city to nearby Cambridge. Because of the heavy traffic and double fees on Sundays, the Medford Turnpike was built to alleviate this issue and was opened in 1803. However, issues arose in 1828 when the Warren Bridge was constructed apparently too close to the Charles River Bridge. This lead to a lawsuit that reached all the way up to the United States Supreme Court in the case known as Charles River Bridge vs. Warren Bridge. The Warren Bridge remained intact as it was considered private property thanks to a 5 to 2 vote.

The bridge was rebuilt in 1900 and later renamed the Charlestown Bridge. The bridge was also built to carry the elevated railway that was passing through Boston and traveling into the suburbs including Charlestown. The railway remained in service until its demolition in 1975 in order to clear the path for the Haymarket MBTA subway station that would later open. At one point, the bridge was the southern terminus of Massachusetts Route 99 until the construction of the “Big Dig” had been completed in the late 2000s. Around the time of the Big Dig’s construction, the bridge had been deemed structurally deficient. It would take years until a decision had to be made for the bridge to be replaced. In 2018, construction for a replacement had begun. The project is slated to be completed as early as 2023. While the bridge may be seeing its final years, could it be that the haunts of the Charlestown Bridge still be out and about? And will they possibly even haunt the new bridge?

There have long been the stories of many hauntings along with the sights that are situated on the Freedom Trail of Boston. And Charlestown Bridge is one of them. But what are the stories that have long circulated that the bridge has earned its reputation of being haunted? One of the stories can be dated back to the late 1840s. It was said that Peter Rugg was riding out a thunderstorm in the early 1770s on a horse-drawn carriage (which legend has it, Rugg was cursed to ride it until the end of time). Another rumor had circulated that he took his young child with him to Boston while declaring that he would arrive there by nightfall.

Regardless of how many adaptations of the story have been told, only one thing had been for certain: Peter Rugg never made it to the city as promised. It was said that he had disappeared somewhere near the Charles River en route to Boston. By this time, the Charles River Bridge had not been completed. Rumors abounded that a man named Peter Rugg was a fiction and the work of a fictional writer by the name of William Austin. The story of Peter Rugg was assumed to be a non-fiction story after it had been published in various newspapers around Boston and later the New England region.

One such recollection was that a man (assuming to be Rugg) was traveling home to Boston with his daughter. As the storm was becoming more intense, a friend of the man was begging and pleading to stay for the night or at least until the storm had passed. The man decided against it and left the house declaring that “let the storm increase” and vowed to make it home whether the storm took him or note.

Soon, it was said that the stories of a spiritual sighting had begun to circulate shortly after the Peter Rugg story had been published. Some have claimed seeing sightings of a spirit that matched the description of Peter Rugg being sighted in places like New York and even Virginia. However, there had been a story of one man who was riding a horse-drawn carriage was apparently lost in Connecticut and had stopped and asked for directions to Boston, saying that he lost his way. He soon disappeared and what never heard from again. Stories of similar encounters were known to spread across parts of New England from as far south as Rhode Island and north into New Hampshire.

In the early years of the Charlestown Bridge, toll workers were often annoyed by the sounds of footsteps or horseshoes making trampling noises and the rattling of carriage wheels. However, no such things would appear before them. At one point in time, a toll worker had yet again heard the noises and decided to stand in front of the toll booth to investigate. He saw what appeared to be a dark shadowy figure of a horse-drawn carriage ridden by a man who appeared to reroute and was never seen soon after. When asked if the ghost of what might have been Peter Rugg would reappear again, the toll booth worker never replied to the question.

Is The Bridge Worth Visiting?

The Charlestown Bridge as of today is still standing and is part of the Freedom Trail that stretches across the city of Boston. To answer the question: it is still worth visiting. But there may not always be a guarantee that you may see the ghost of Peter Rugg or any spirit for that matter. Legend has it that the ghost of Peter Rugg had only appeared near the bridge on nights when the weather was not the best. On rainy, foggy, or even stormy days or nights the apparent spirit of Peter Rugg may have appeared (horse-drawn carriage and all). With the new bridge being built as of today, traffic might be a haunting sight to see up until the completion of the new bridge. So if you don’t see any ghosts, a traffic jam might be haunting enough.

The Charlestown Bridge may still be standing as of today. But whether or not if Peter Rugg still seems to make an appearance remains to be seen. If you live in or near Boston, you might consider yourself lucky. If you live outside of the city and want to go on a paranormal adventure, there are many places that are considered to be haunted. If you can’t find anything on the Charlestown Bridge, don’t worry. There are plenty of ghostly places you can check out in Beantown that have a story or two that will leave your hair standing on end.