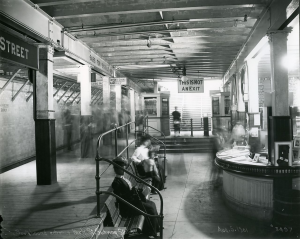 The Park Street Station is located on the Green And Red Lines of the Massachusetts Bay Transit Authority subway in Boston, Massachusetts. Best known by locals as the “T”, the subway is used by thousands of riders on a daily basis. With so many coming to and from the trains are either heading home or going to work. Of course, let’s not forget the tourists that flock from the world over to take in the historic sites that marked America’s early history. But for the many that travel the T during the day, no one could ever think about the paranormal activity that might be happening while many are filing in and out. But the Park Street Station is one such station on the T where such activity was said to be reported. But is it really that haunted? We will discuss the history of the Park Street Station and tell the story that may be linked to the apparent hauntings of one of the busiest stations on the MBTA system. 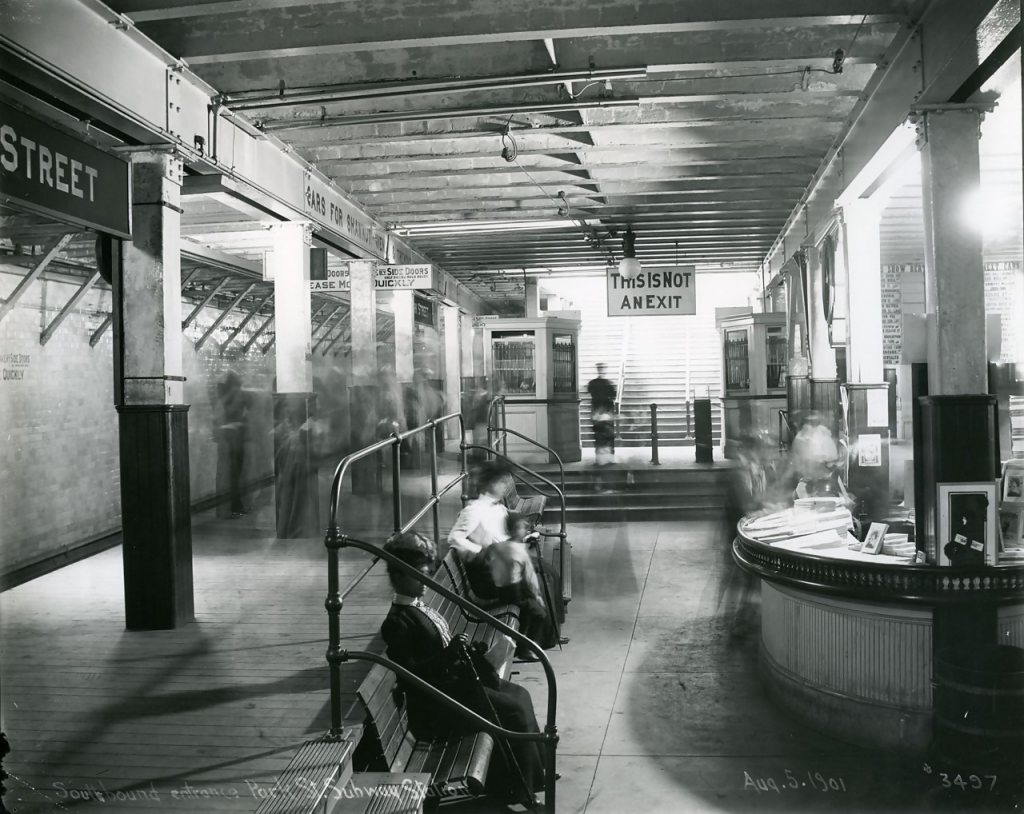 The Park Street Station was open for operation on September 3, 1897. The station was designed to connect the southern half of the Tremont Street Subway station. The tracks were connected from the station to go through the Public Garden Incline and through Boylston Station. The station was located on Park Street in Boston. The following month, another station known as the Pleasant Street Portal was connected to Park Street. The station had 4 tracks and 2 boarding platforms at the time of its opening. A year later, the Park Street Tunnel was soon extended to various stations within the MBTA system. Some of the trains would even go all the way to the end of the line before looping back in a reverse direction. In fact, the Park Street station had a loop that allowed trains coming from the south and the west to travel in such a direction.

A few years later, Park Street and other subway stations were being renovated as the tracks were being elevated. The tracks were retrofitted with wooden sections. Throughout the 1900s and beyond, the station along with the rest of the MBTA system. Even when the Park Street Station became part of the MBTA in 1964, the entire system continuously underwent renovations and consistent track work to ensure that the subway system was up and running throughout the entire city.  To this day, Park Street is planning on making major improvements that will be estimated at around $12 million. One of the planned events as part of this renovation is the potential re-opening of the Temple Place entrance of the station. That part of the station had been closed in 1976.

Is It Really Haunted? 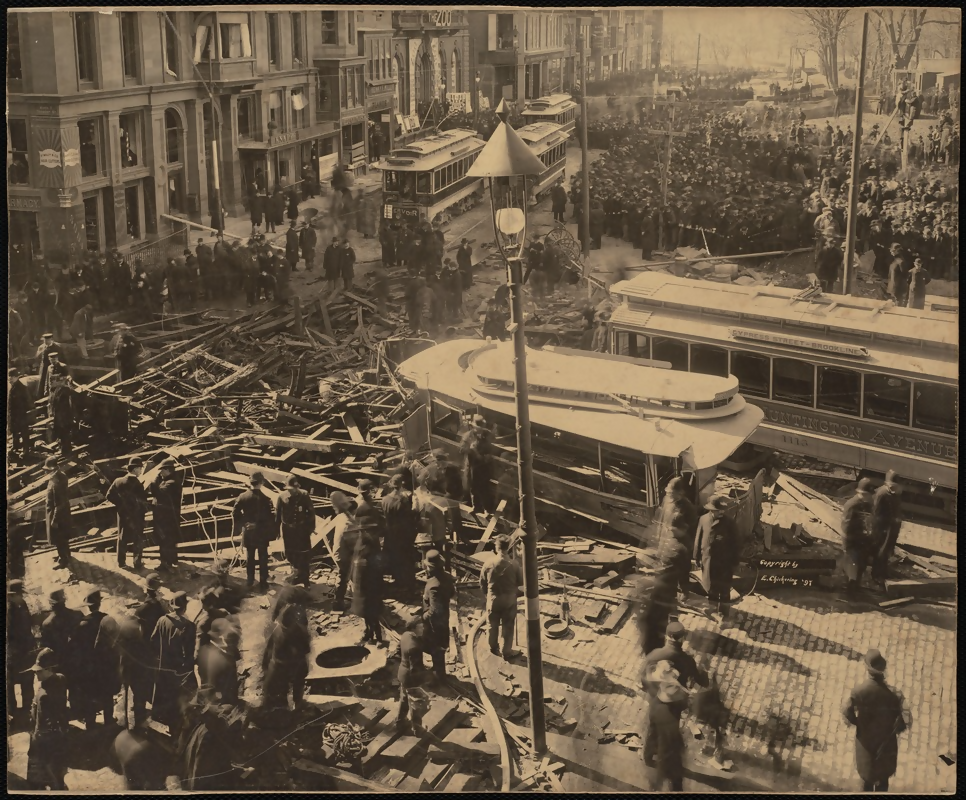 While there are well over 130 stations within the MBTA subway system, the Park Street Station stands out for one strange reason. Apparently, the station itself might be haunted. More specifically, many of the passengers that have frequented the station have reportedly heard the sounds of wailing and moaning time and time again. Some have said that it might have been the spirits of past passengers that had grown weary of the day to day commute from home to work.

Park Street was one of the major stations that served the Red Line, which typically had stops in notable parts of the city including South Station and places that have employed scores of people (i.e.–Mass General Hospital, Harvard University, etc.). Most of the passengers “moaning and groaning” was in all likelihood travelers of the red line in general complaining about the day that lied ahead (or what had occurred). If anything, you may encounter a spirit that might be complaining about how it was just another bad day at the office.

Other passengers have said to have felt some strange presences over the years. How could it be possible for a subway station (albeit one of the busiest in the city of Boston) to have some kind of paranormal activity going on with so many people coming and going from the station? While it might not be confirmed at this point, some have said that the spirits may be that of the victims of those who had died in a tragic event not at Park Street Station, but at the next station over (Bolyston Street).

In 1897, the Boylston Street Station was the sight of a gas explosion that had occurred just prior to Park Street officially opening up. Before the disaster, many citizens had complained about the smell of gas since December 1896. However, on March 1897 the explosion would soon occur. Evidence pointed to a clock stopping at 11:46 AM, which would determine the time of the incident. Some of the other clocks at reportedly stop due to the amount of shock that is absorbed from the explosion. The cause of the explosion was said to be a mix of air and gas mixing together. What may have ignited it was a passing train was leaving the station. A spark may have flown and therefore setting the stage for a disaster. A train car was quickly engulfed in flames, killing almost everyone instantly. As a result, six people were killed along with nearly 60 to 70 people dealing with serious injuries.

An investigation revealed that a large break in the gas main caused the gas leakage. Despite the various complaints, the gas company may have rectified the situation much sooner. This lead to the question of whether or not they had honored or even ignored the complaints. More than $40,000 (over $1 million in 2019 valuation) in damage was reported. Charred train cars and broken windows were accounted for a good chunk of the damage.

So whether the station itself or the places near it are haunted are anyone’s guess. But if you happen to hear the sounds of moaning and wailing like the other passengers have reported, then that’s certainly something to keep in mind. But don’t chalk it up as an apparent paranormal event without any other verification or evidence, since those sounds may come from a mortal rather than a spirit. These days, it could be hard to distinguish.

Is The Station Worth Visiting?

Since it is a public transit station, it is worth visiting if you’re passing through, getting on the train, or departing it. But it might seem a little weird at first to go to a subway station simply in search of ghosts. Yet, that doesn’t mean you shouldn’t keep your eyes and ears peels for anything that might seem out of the ordinary. If you are traveling to Boston or live in the area, you may want to check it out in your spare time (or if you use the station for commuting purposes). But there is no guarantee as to whether or not you’ll be able to encounter any spirits or paranormal activity along the way. But if anything, there is actually an unused tunnel that was once part of the Subway. While it’s no longer in service, you might be able to find it on your own or via a tour (if you manage to land a spot).

The Park Street Station might be haunted to some. But it might just be a rumor for many people. If you so choose to visit the station, it might be important to use your better judgment. Sometimes, it might be good to strike a conversation with someone who might know a thing or two about the station. If you seem to strike out when it comes to finding paranormal happenings at this subway station, do not despair. There are plenty of places throughout Beantown that just might be more appealing to you. And they just might be close to the station rather than a long hike away. But regardless, make the most out of your Boston paranormal adventure if you dare.