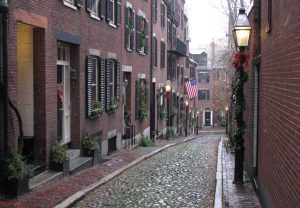 The name, ‘Boston Strangler’ may bring up, for some, images of a 1968 American film, loosely based on the true and horrifying story of the Massachusetts-born serial killer himself. The Boston Strangler’s story is truly one of the most chilling, given rise to multiple film adaptations, books, and magazine articles. What makes these particular murders stand out is the fact that many of the victims were elderly and alone, adding to the brutality and tragedy of the cases.

Albert Henry DeSalvo would later confess to the murder and rapes of 13 women in the Boston area from 1962 to 1964. Born September 3rd, 1931, Albert was born in Chelsea, Massachusetts. He was brought up with four siblings. From an early age, he witnessed violence due to his father’s alcoholic tendencies. He watched as his father broke all his mother’s fingers in front of him, and at one point, he even knocked all her teeth out with one punch. As a child, Albert began to show psychopathic tendencies when he started to torture animals and shoplift. He later enlisted multiple times with the army, and was honorably discharged each time, which is slightly worrying!

At 29, he had spent time in prison for a strange series of peeping-tom like escapades. DeSalvo was considered well-built and handsome, and he used this to his advantage when he would knock on single women’s doors and pretend to be a model scout. If he was invited inside, he would ‘measure up’ the women and proceed to ask them to remove their clothing. Eventually, the jig was up, and he spent 18 months in prison for this disturbing pastime.

Years after he was discharged from the army, he settled down and married a woman named Irmgard. They lived a normal life, and after giving birth to a handicapped child, Irmgard avoided intercourse with Albert due to fears of having another child with physical disabilities. However, a healthy boy was born, and Albert appeared to be a conscientious, family-centered man. Even though he had a large tendency to brag, he was well-liked and appreciated by his colleagues and boss.

Between June 1962 and January 1964, 13 single women between the ages of 19 and 85 were brutally murdered in the Boston area. Most were sexually assaulted in their apartments and found strangled with pieces of their own clothing. Police believed the attacks were perpetrated by one man. Two of the victims were stabbed, while another died of cardiac arrest during DeSalvo’s attack on her. With no sign of forced entry in any of the cases, the victims were assumed to have known their killer or allowed him inside voluntarily. Police began to suspect that DeSalvo had been posing as maintenance, delivery, or postman to gain trust and entry into the women’s homes. DeSalvo’s attacks continued even with extensive media publicity, showing not only the egotistical nature of the attacks but the blatant ignorance and disregard for his own freedom.

After a two-year killing spree, the most gruesome murder was committed on January 4th. This would be the last one committed by the Boston Strangler. Mary Sullivan was found dead by her two roommates, sitting against her bed’s headboard. She had been strangled with a stocking, and sexually assaulted with a broom handle. The obscenity was found to be even more disturbing by the fact that a Happy New Year card lay wedged between her feet.

The End of His Era

On October 27th, 1964, his reign of terror would come to a screeching halt when his conscience overtook his power-hungry ways. DeSalvo entered a young woman’s home, posing as a detective. He proceeded to overtake her, tie her to the bed, sexually assault her, and at random he stopped, looked into her eyes, and left suddenly while saying ‘I’m sorry’ repeatedly. Leaving the woman alive, she was able to go to the police and describe her attacker. Her description eventually led to the police identifying Albert DeSalvo as the attacker in other assault cases around the city. Originally, DeSalvo was not suspected of being involved with the strangling murders. But after he was charged with rape, he came clean to a fellow inmate while he was in jail and gave a detailed confession of his activities as the Boston Strangler. This inmate later reported the confession in exchange for plea deals of his own interests.

Once he was sentenced to life in prison in 1967, he managed to escape with two fellow inmates from Bridgewater State Hospital, which triggered a full-scale manhunt. A note was left stating that he intended to escape to focus national attention on the horrid conditions at the hospital that he and his fellow inmates were forced to endure. He was eventually captured and put into maximum security at Walpole State Prison. Six years later, he was found stabbed to death in the infirmary. His killers were never identified. A sort of vigilante justice, if you must.

Did They Catch the Wrong Guy?

Prior to DNA confirmation in 2013, doubts floated about that DeSalvo was not the Boston Strangler and was just taking credit for the crimes. John E. Douglas, the former FBI agent who was one of his first criminal profilers, doubted that DeSalvo was capable of what the Boston Strangler did. He identified DeSalvo as a ‘power-assurance’ motivated rapist, which meant that this type of rapist is unlikely to kill, but they are more prone to taking credit for heinous crimes.

People who knew Albert DeSalvo personally did not believe that he committed these crimes either. Doubt was cast of a serial killer being involved in these crimes, particularly, as serial killers tend to have a certain ‘type’ of victim and method of murder. The women killed in this string of murders were from a variety of age and ethnic groups, and each time the ‘modus operandi,’ or the way in which one operates, was different. In 1996, author Susan Kelly described in her book ‘The Defense Never Rests’ that the murders were the work of several killers rather than a single individual. This would mean one or more of those attackers are still roaming free, or have died without any repercussions for their crimes.

On July 11th, 2013, the Boston Police Department released new information stating that they had found DNA evidence that linked Albert DeSalvo to the murder of Mary Sullivan in 1964. DNA found at the scene was a ‘near-certain match’ to DNA retrieved from DeSalvo’s nephew. Since Y-DNA is passed through direct male family lineage without much change, it can be used to link males with a common paternal-line ancestor. An exhumation of Albert’s body was ordered where DNA was obtained from him as well. The results proved that DeSalvo was responsible for Sullivan’s murder… but what about the others? Police knew that DeSalvo was responsible for multiple rapes in the area, but even with DNA evidence, doubt still ran rampant that DeSalvo committed all the Boston Strangler murders.

With terror laying in his wake, the homes that witnessed these killings still stand today. Like the home of Ida Irger, 75 years old and the 5th victim of the Strangler, who lived at 7 Grove Street. Or Sophie Clark, the youngest of the victims who was found dead in her apartment at 315 Huntington Ave… she was the Strangler’s 7th victim. Even the apartment of Mary Sullivan, the 13th and final victim, who was found dead with a greeting card between her feet. These homes have all absorbed the horrific scenes and energies created by the crimes committed inside of them. At 435 Columbia Rd, Jane Sullivan was found 10 days after her death, her body so badly decomposed due to the hot August climate. The Boston Strangler, whether DeSalvo or not, left such nightmares behind, even years after these crimes were committed.

So, what do you think? Do you believe that Albert DeSalvo committed all of these crimes? Or did his overinflated ego persuade him to take the ‘credit’ for these most heinous of murders? Do some more research and decide for yourself. Perhaps you’ll uncover a clue that detectives have yet to find!