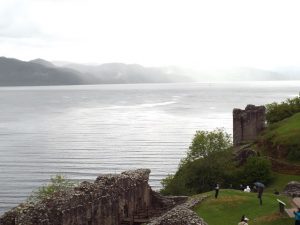 The legend of the creature that lurks within the depths of Lake Loch Ness, a picturesque lake in the Scottish Highlands, dates all the way back to Roman times. Roman warriors came to Northern Scotland in the first century A.D. They soon found that the Highlands were occupied by fierce, tattooed tribes known as the Picts, or ‘painted people.’

This tribe of people had a fascination with the region’s animals, with large life-size stones erected around the region. All the animals depicted on the Pictish stones are easily recognizable and lifelike – except for one.

The Roman soldiers saw a strange beast, with an elongated neck, small head, and flippers in place of feet. Described by some Roman scholars as a ‘swimming elephant,’ this Pictish depiction is the earliest known evidence found for an idea that has floated around the Scottish Highlands for at LEAST 1,500 years… that Lake Loch Ness is home to a truly mysterious and elusive aquatic creature.

In Scottish folklore, large creatures have always been associated with many bodies of water, the assumption that such a large ecosystem must be home to large animals as well. Nessie, otherwise known as a “Loch-na-Beistie” on olden maps, is a ‘water-horse’ or ‘sea-kelpie’ which are said to have magical powers and malevolent intentions. In one version of the legend of sea-kelpies, it is said that the creature lures small children to the water, only to offer them a ride through the lake on its back. Sounds peaceful enough, but the legend continues by saying that once children are aboard the beast, their hands become stuck and they are dragged downwards to a watery death, washing ashore the next day.

The earliest written account of such creatures dates all the way back to 565 A.D., when Saint Columba, who has been credited with introducing Christianity to Scotland, saw a beast about to attack a man who was swimming in Lake Loch Ness. Columba raised his hand, invoking the name of God, and commanded the monster to “go back with all speed.” Luckily for the swimmer, the beast complied.  This account was found in Saint Columba’s biography.

Legend of Then and Now

About a dozen pre-20th century accounts have been recovered, with more probably going unreported. The legends surrounding Lake Loch Ness have swum strongly into the late 20th century, up to today.

The modern legend of the Loch Ness Monster dates back to 1933 when a new highway was being built along the shore of the Lake, offering the very first clear views from the Northern side. One April afternoon, a local couple traveling along the new road reported seeing an enormous animal rolling around and plunging on the surface of the water. They brought their story to the Inverness Courier, which labeled the creature ‘monster,’ and created a legend that has persisted through time.

After this account, more and more people reported seeing the creature, sometimes on land, sometimes in the Lake. Excitement built steadily until December that year when The Daily Mail hired an actor, film director, as well as a big-game hunter named Marmaduke Wetherell to come to the Highlands and track down Nessie once and for all. After a few days, Wetherell reported finding fresh four-toed footprints in the sand of the Lake. He estimated the creature to be at least 20-feet long. He made plaster casts of the footprints and sent them off to the Natural History Museum for analysis. While the world waited to hear the results, hundreds of tourists and ‘monster hunters’ descended upon the Lake, filling hotels and clogging local roads.

In early January, museum zoologists reported back with their findings, which were less than extraordinary. They claimed the footprints had been made by a large hippopotamus. Since no hippo roams the region, it was concluded that the prints had been purposefully planted with a ‘stuffed hippopotamus foot.’ It wasn’t clear whether Wetherell was the perpetrator of the hoax, or if it was one of the townsfolk playing a joke. Regardless, the incident has tainted the view of the Loch Ness Monster and discouraged any serious investigations into claims for the next three decades. Sightings of Nessie became nothing more than ‘optical illusions,’ caused by boat wakes, logs adrift, otters, and swimming wildlife.

Regardless of the public view of Lake Loch Ness, some eyewitnesses KNEW what they saw, and continued to come forward with accounts, about 4,000 of them. They told tales of seeing flippers in the water, a long neck protruding, but the most remarkable fact was that these were level-headed trustworthy witnesses. They were doctors, lawyers, priests. Scientists, schoolteachers, police, and firemen, they weren’t the types of people who sought attention and fifteen minutes in the limelight.

More Than a Legend

In the 1950s, a local physician Constance Whyte began to collect these eyewitness accounts, along with sketches drawn by witnesses. She finally published a book of all accounts in 1957 entitled, More Than a Legend. The book brought to light just how many people were seeing this creature, and the detail in their accounts was hard to disprove. Her book later inspired a new generation of monster hunters, and the legend of the Loch Ness Monster picked back up with tremendous speed.

No longer the victim of being ‘silly,’ Nessie was considered worthy of serious investigation and press reporting. Throughout a decade, beginning in 1958, four separate expeditions were launched, the first being brought by the BBC. Following that were teams from three respected British universities: Oxford, Cambridge, and the University of Birmingham. These expeditions came with money to back them, and the instruments they brought made the binoculars and cameras of expeditions passed seem like child’s play.

Armed with sonar, the teams searched the underwater environment with vigor. Although nothing conclusive was ever found, each team did report accounts of the sonar detecting large, moving underwater objects that they could not explain.

Throughout the late 20th century, in the 1970s, the search of Lake Loch Ness reached new heights, when investigations brought forth by the Academy of Applied Science started to combine sonar, photography, and even traps for the first time. This system paid off one late night in 1975 when sonar registered a large object in motion. At the same moment, an underwater camera captured pictures of an object that looked like the flippers of an aquatic creature. Throughout the end of the century, more investigations were carried out, each finding its own evidence, although not without raised eyebrows and suspicion.

In the legend’s 65 years, many people have come forward with photographs they claim to be pictures of Nessie herself. Most have been quickly dismissed as fraud, or cases of mistaken identification. Only one photo taken in 1934 has stood the test of time and remained unexplained for quite some time.

The photo shown seems to be a slender neck of a creature peeking through the surface of the Lake. It remains the strongest evidence that the Loch Ness Monster actually exists. The photo has been held credible since it was submitted by a physician by the name of R. Kenneth Wilson, who claimed to have shot the photo when he noticed a commotion in the water as he was driving. Few people believe the doctor could be capable of such deception.

But this photo was questioned once Wetherell came into the light, claiming that the doctor had concocted a plot with a man named Maurice Chambers. Wetherell mentioned that the doctor’s photograph included scenery of the background, but was cropped to fit the story since the scenery of the original photo was not that of Lake Loch Ness. It is claimed that the full photo had been found in the late 80s, but that photo was only ever published once in 1934.

It is stated that on his deathbed, Wetherell stated that he was “unhappy with the way he was treated by the Daily Mail after the hippo foot fiasco, so he had set out to get his revenge, enlisting his son and step-son in the plot. First, they built a model monster by grafting a head and neck onto the conning tower of a toy submarine. Then Wetherell and his son Ian drove up to the loch and staged the photograph, taking care to include the actual Loch Ness scenery in the background. Finally, to conceal his own role in the hoax, Wetherell persuaded Dr. Wilson, through their common friend Maurice Chambers, to have the photo developed and sell it to the Daily Mail as his own.”

Even with the explanation of the photograph, locals and visitors still believe that Nessie roams the waters of Lake Loch Ness. The man who told Wetherell’s deathbed story even claims to be a firm believer in Nessie. He went on to say “I am so convinced of the reality of these creatures that I would actually stake my life on their existence, I trust my eyesight … I used to make my living teaching people how to observe, and I know that the thing I saw was not a log or an otter or a wave, or anything like that. It was a large animal. It came heaving out of the water, something like a whale. I mean, the part that was on the surface when it stopped rolling through was at least 20 feet long. It was totally extraordinary. It’s the most amazing thing I’ve ever seen in my life, and if I could afford to spend the rest of my life looking for another glimpse of it, I would.”

For more on Nessie and the legendary Lake Loch Ness, feel free to conduct your own research, or click here.