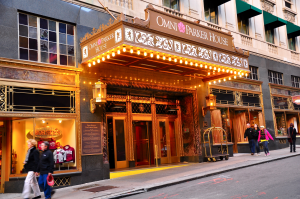 Boston is the largest city in the New England region of the United States. It is a city that is filled with a rich history that dates back well before the Revolutionary War. It was settled in 1630 but was not established as a city until 1822. This was a city that was famous for the prequel that lead to the Revolutionary War. The events that lead up to it were the Boston Tea Party, Paul Revere’s ride, and the “Shot Heard Around The World” at nearby Lexington. In its rich history also lies an abundant amount of ghost stories and hauntings.

If you ever find yourself in Boston, you will need to make sure that you visit one or even a few of these places on the list. If you are a sucker for history and adventure, you may just get to encounter the spiritual presence of one of our forefathers (or someone who gave the ultimate sacrifice in the Revolutionary War). Walk the Freedom Trail or take a Duck Boat. Either way, you’ll end up in one of the following places below: 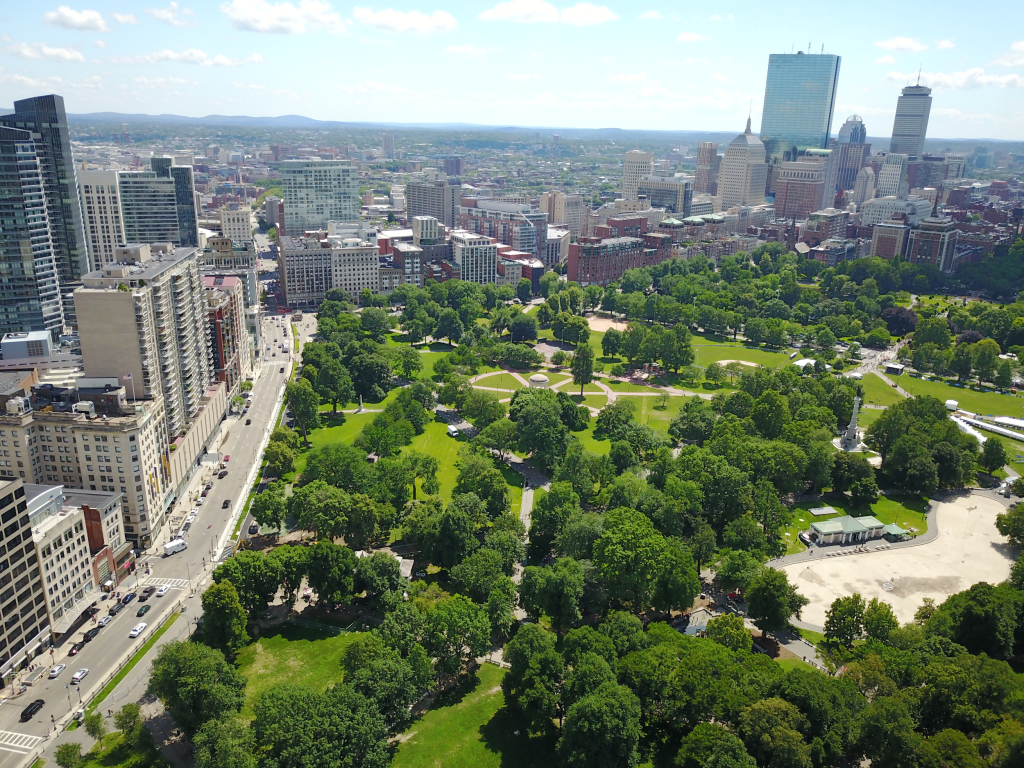 This park filled with lush green grass and trees is located in front of the Massachusetts State House. During the day, you may see some ducks, people milling about, and a few other critters scattering about. However, this all changes at night. You may find a spiritual presence or two in this large swath of land.

When the British had control over Boston, it served as a place where executions were carried out. It wasn’t the British Army that carried them out as they did during the Revolutionary War. It was the Puritan settlers. The Puritans would often execute those who committed severe crimes against their church (i.e.–Witchcraft).

The oldest public park in the United States was the place where many were hanged from the gallows for whatever crime fit the punishment. The specters of those executed are said to haunt the grounds at night. 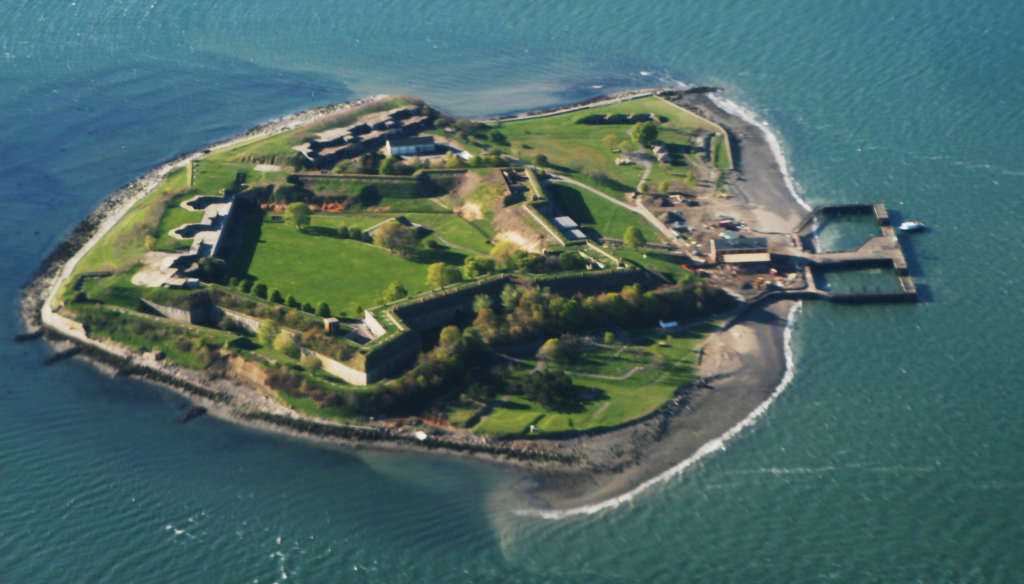 Located due east from Boston Harbor is an island that is said to be haunted by a ghost that is known as the “Lady In Black”. The story behind this island is interesting. This served as a prison for Confederate soldiers during the Civil War. Before there was Alcatraz, there was this.

It was said that the “Lady In Black” was the wife of a Confederate soldier who was held prisoner on the island. She had planned to bust him out while disguising herself as a Union soldier. But when she was exposed, her fate was sealed. It was said that she was either shot on sight or was tried and sentenced to death soon after.

At one point, the Daughters of The Confederacy had established a memorial in memory of the Confederate soldiers who were imprisoned or have died here. However, the memorial was removed in 2017. While this place may not be heard of due to the many landmarks that represent the Revolutionary War, the City of Boston indeed did have a hand in being a strategic city that helped the Union win the Civil War. 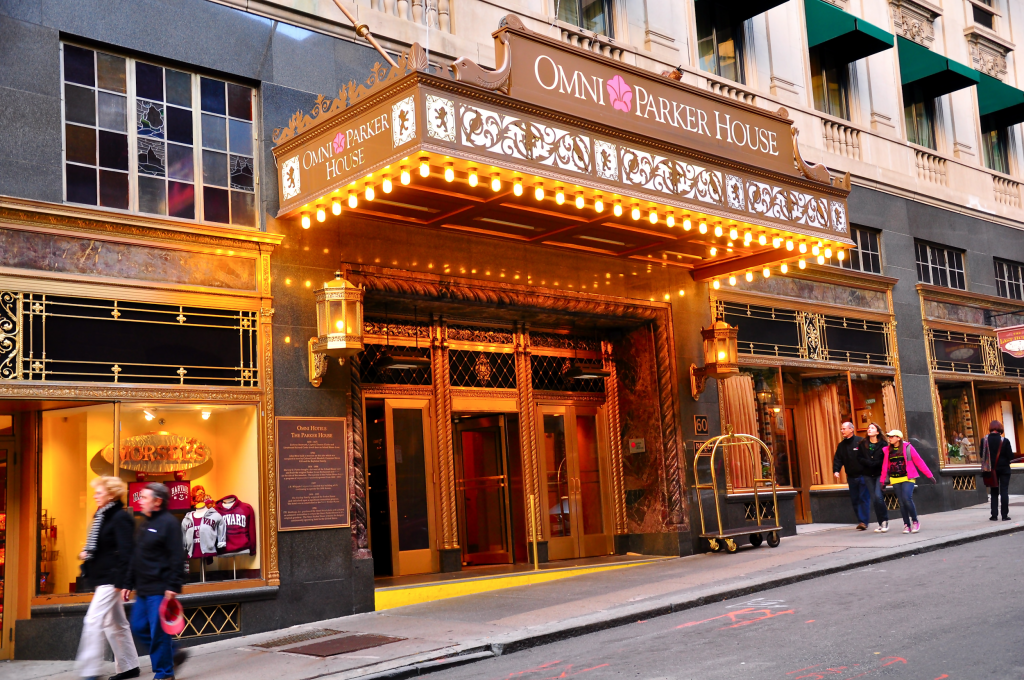 The Omni Parker House currently serves as one of the most prestigious hotels in the City of Boston. It was named for the developer Harvey Parker, who passed away in 1884. Some of the visitors of this hotel in the past have included author Charles Dickens. Dickens had stayed on the third floor of this hotel each time he visited Boston. Word has it that the ghost of Dickens himself may have moved the elevator to the third floor without any buttons being pressed or lit up.

As for other specters looming around the Omni Parker, one other might be of Harvey Parker himself. According to one recount, a guest saw a “heavyset man with a black mustache”. It is also rumored that this specter may also be present in a possible annex of the tenth floor. If you are thinking of staying at a place where a haunting may be right outside your door (if you so choose), this might be the place to go. 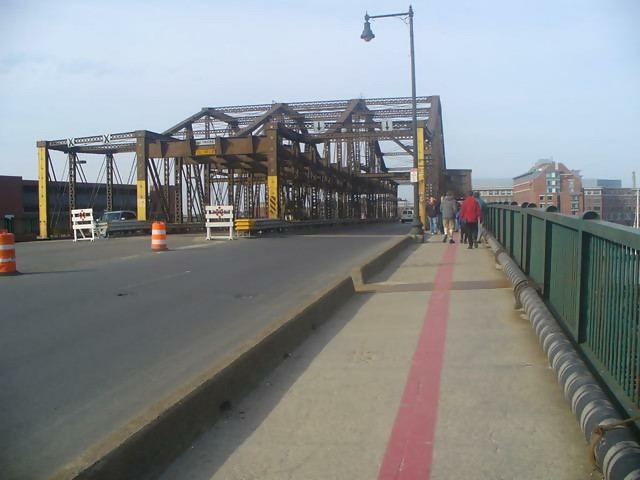 The Charlestown Bridge is located towards the end of the Freedom Trail. Of all the places that you’ll come across on a trail that features the Old Granary Burial Ground and Paul Revere’s House (among others), this might be the place where you’ll hear the stories of certain hauntings. It is said that the sounds of horse hooves clacking can be heard off in the distance somewhere. But the phantom horse could not be found.

That might be the specter that belonged to a Boston resident named Peter Rugg. Rugg was said to have disappeared on the night he was headed back to Boston from nearby Concord. It was a stormy night and Rugg may have had trouble navigating the terrain around him. There is no question that Rugg disappeared. And his body may have never been discovered. But there is no doubt that his spirit might be somewhere on the West side of this bridge. 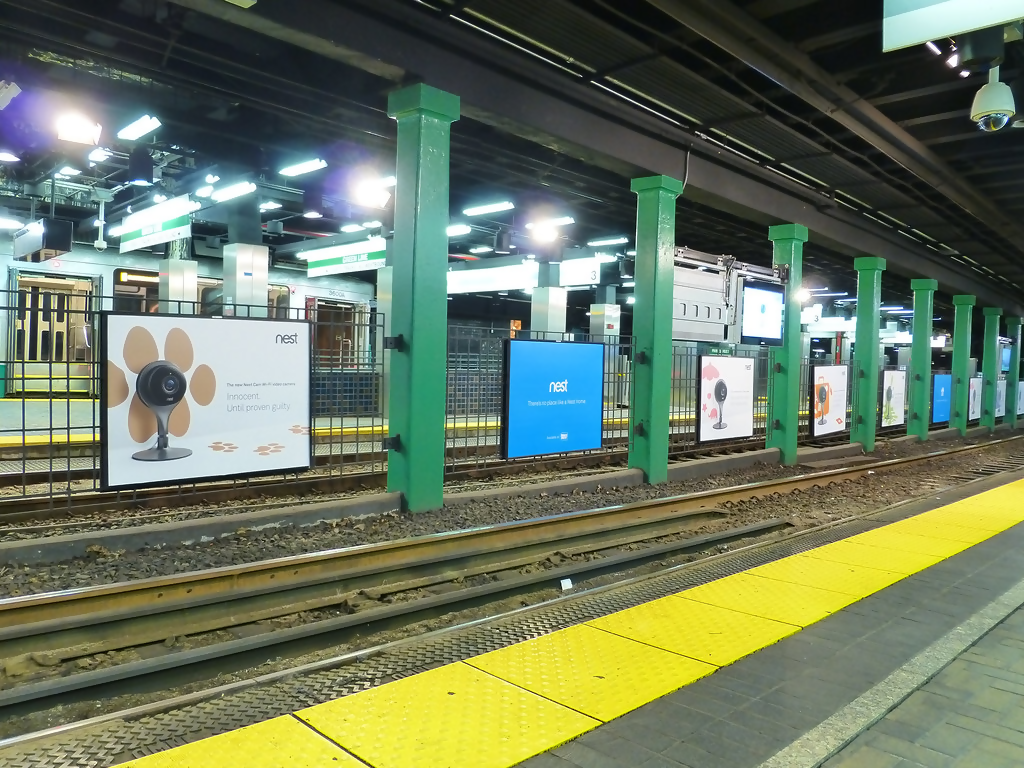 The MBTA Subway System (or better known as the “T”) spans throughout the city and the suburbs of Boston. However, there is one station that might be the place where you can hear random moaning and groaning (and it’s not from the living). The station is connected to both the Red and Green Lines of the “T” and is one of the busiest stations within the entire system. But that doesn’t keep the specters of the commuters of ages past from hanging around.

Aside from the noises, there have also been stories of some hauntings at other stations. The Boylston Street station is also said to have some kind of haunting stories. It was the sight of a gas explosion that happened in 1897 that had killed nearly a dozen people. If you live in Boston and commute using the Green Line, you might ask yourself who else has been riding along with you this whole time. 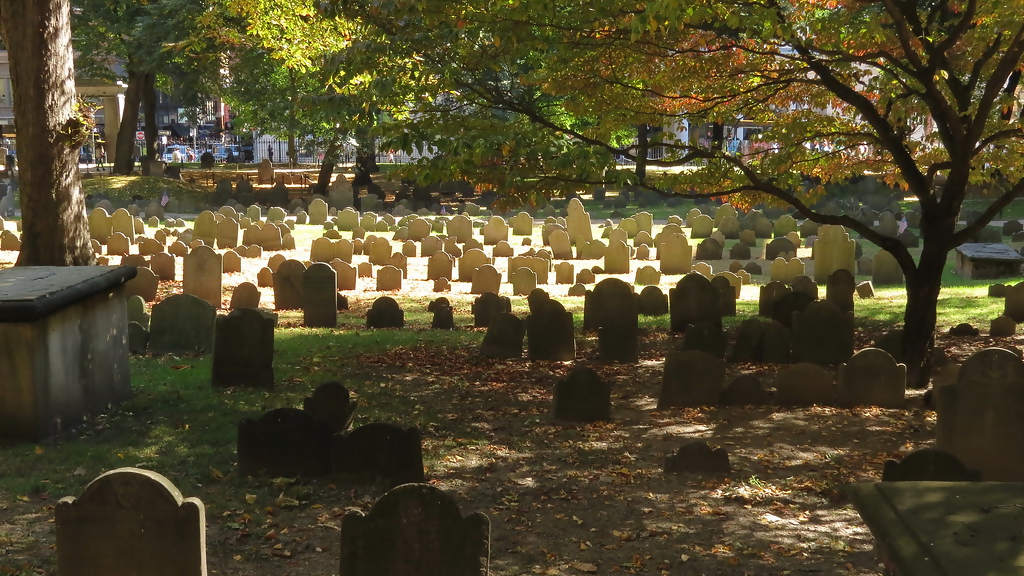 The Granary Burial Ground is located right off the Freedom Trail. It is one of the oldest cemeteries in Boston. Some of history’s most famous figures (like John Hancock, Thomas Paine, and Paul Revere) are laid to rest here. Believe it or not, there is another famous person that is also buried here. She is said to be the writer of some certain childhood nursery rhymes. Legend has it that the one known as “Mother Goose” is said to be interred here in this cemetery. To this point, there is no proof or confirmation of whether or not it is the real deal.

It should be no surprise that the specters of some of our founding fathers might be milling around here on this old school burial ground that is nearly 400 years old. Most of the dead buried here were also the earliest casualties of the Revolutionary War. One such notable person was a freed slave named Crispus Attucks. Attucks was killed in action during the Boston Massacre against the British Army just before the Revolutionary War took place. 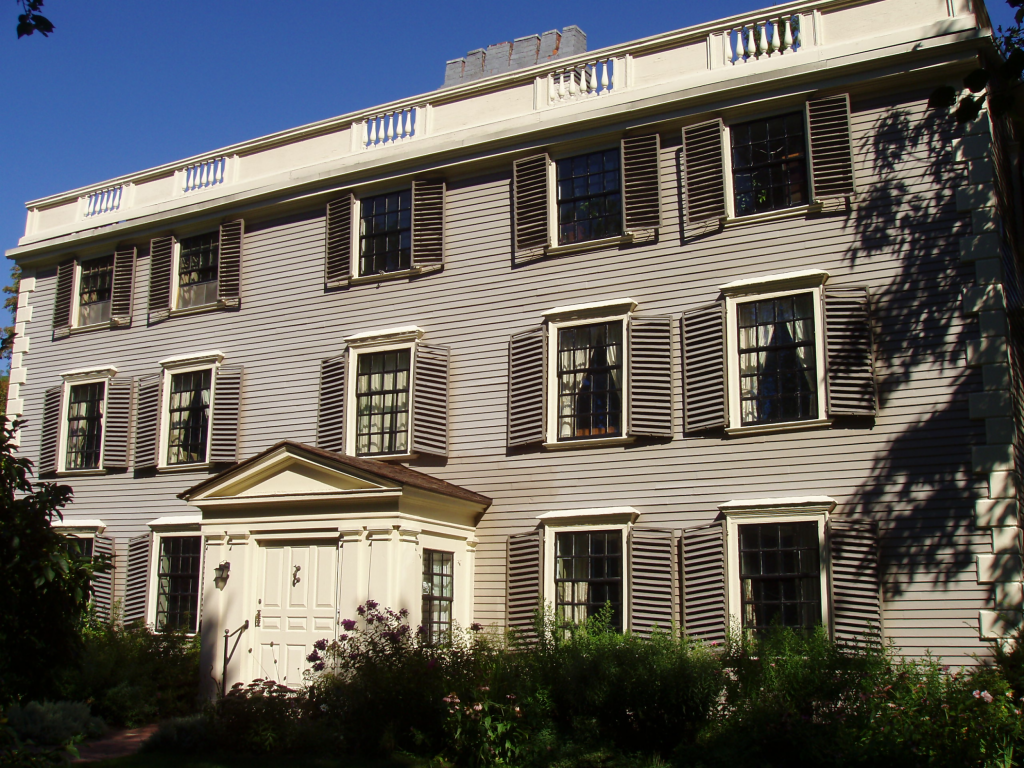 Throughout the Revolutionary War, the Hessian soldiers were aiding the British in beating back the Colonists. This house was one of the places where they quartered up during their time. The specters of a few Hessian soldiers were said to be dormant until the early 20th century when a new annexation of the house was added on. Because of the construction, it was said to have awakened them.

To this day, there have been accounts of cards being shuffled around. It is said that the Hessian soldiers were playing cards and have been stuck in a stalemate ever since. Another interesting fact is that these five Hessian soldiers that stayed behind after the British surrendered to the Americans, thus ending the Revolutionary War. Some who have walked past the house at night might have seen the apparition of these soldiers playing cards. Some have said that they might have seen a person getting up and walking away from a table. 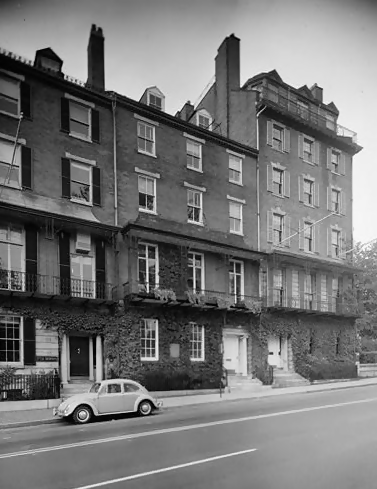 This house was the site of a gruesome murder that took place in 1849. The victim was George Parkman, a physician who was highly respected throughout Boston. He was later murdered and dismembered apparently by a Harvard professor. Parkman’s remains were burned and found by a janitor near the “cadaver room” of the Harvard Medical School. It is said that Parkman’s ghost is a fixture of the home and is the subject of many haunted encounters. Not to mention, he may have been the cause of several disturbances in and around the Bunker Hill neighborhood for many decades.

Berklee College of Music is one of the most prestigious music schools in the country (next to Julliard in New York). Despite all the noise many people are making with the myriad of musical instruments, it is the residence hall that may be a place where someone could be shuffling around the halls and randomly making noise. It was said that a fire had broken out at the residence hall one night that resulted in some fatalities. The apparitions of those killed may still be wandering around the residence hall or even some parts of the campus.

Aside from the apparitions, some have reported seeing random fires starting. One such recent fire occurred in October of 2018 that caused many students to be displaced and transferred off campus to a nearby building. The fire badly left the building damaged. While the cause may not have been known, you can probably draw your conclusion on what may have started it in the first place. 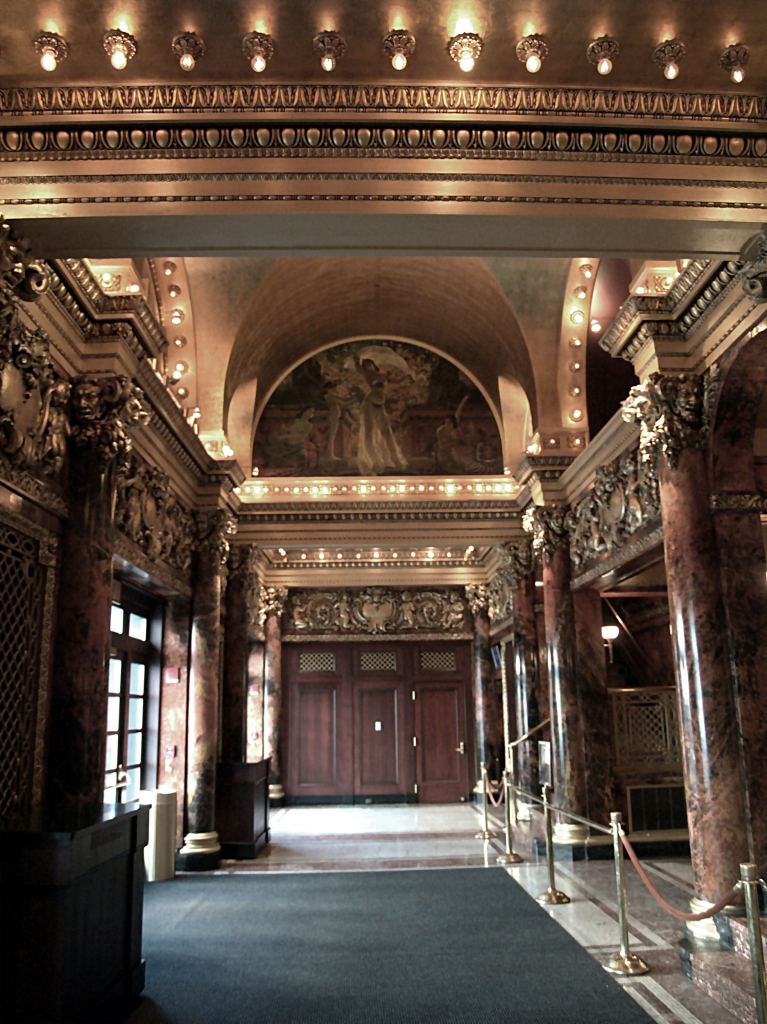 The theatre is located on the campus of Emerson College. Built in the early 20th century, this was the place where many performing art events have happened. It was also said that a former mayor of the city died here midway through a performance. The mayor may also be hanging around this theatre and possibly causing random power outages and shuffling around chairs. Even a handful of students that have attended Emerson College will often tell the stories of strange power outages that have occurred inside the theatre while it was still “lights on” outside for the rest of the campus.